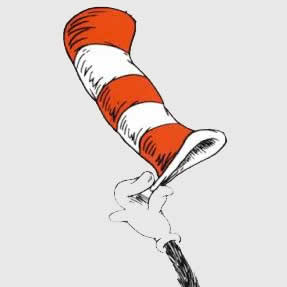 Arguably, Dr Seuss is one of the best children’s authors of all time. Hardly a human in the world has never heard of the rhyming cat in a hat!

But did you know that you’ve been saying his name wrong all of these years? Yup! Dr Zooss is, in fact, Dr Zoyss. Y’learn something new every day! Alexander Laing wrote a witty poem on the subject;

You’re wrong as the deuce

And you shouldn’t rejoice

If you’re calling him Zooss

Dr Seuss – Theodor Seuss Geisel – was born on 2nd March 1904 to Henrietta and Theodor Geisel in Springfield, Massachusetts, USA and died September 24th 1991 in La Jolla. He went graduated from Darmouth College and went on to Oxford University to study a PhD in English. He left the university having not gained his degree, and returned to the United States to begin pursuing a career in drawing. He submitted writings and drawings to magazines, book publishers and advertising agencies, having his first published cartoon appear in The Saturday Evening Post on Jul 16th 1927.  Later the same year, he accepted a job as a writer and illustrator for a humor magazine

In 1940, Seuss wrote Horton Hatches an Egg, and so the popular poetry books were born.

During his lifetime, Seuss authored more than 60 children’s books under the Dr Seuss pen name and is the ninth best-selling fiction author of all time.

This book, written for beginning readers, is probably one of my earliest memories of Dr Seuss books. I found the rhyming and pictures so exciting. Apparently, the text consists of only 50 discrete words; the result of a bet between Seuss and his publisher.

Do you think he likes them by the end of the book? You bet!

The Cat in the Hat

Possibly one of the more famous stories due to its film adaptation in 2003 starring Mike Myers.

The story is about an extremely tall cat who wears an equally tall and white striped hat and a red bow tie. The cat turns up at Sally and her brother’s house one cold and wet day – “Too wet to go out, and too cold to play. So we sat in the house. We did nothing at all.” – and entertains the children with his tricks, much to the objections of the children’s fish. The cat’s companions Thing One and Thing Two wreck the house, much to the children’sd alarm, but the Cat cleans everything up and disappears right before their mother returns home.

This is a great story about Fox and Knox and, of course, a box and some socks. And some chicks and bricks, blocks and clocks.  While Mr. Fox progresses through many different permutations of those rhyming words, the last straw for Mr. Knox is “a Muddle Puddle Tweetle Poodle Beetle Noodle Bottle Paddle Battle“.  What could possibly happen next?

Horton Hears a Who!

Another story that was adapted for film in 2008, is Horton Hears a Who! which is about a small speck of dust that talks to Horton the elephant while he is splashing in his pool one day. Horton believes that a small person lives on the speck and so he places it on a clover and vows to protect it.  He later discovers that the speck of dust is actually a planet called Whoville where the Whos live. The Whos ask Horton to protect them and he promises that he will; A person’s a person, no matter how small.

What mayhem will Horton get up to?

The last book on my list of The Lorax which was first published in 1971. The story follows a boy living in a polluted town comes across a man called the Once-ler. He pays the Once-ler fifteen cents, a nail, and the shell of a great-great-great-grandfather snail to hear the legend of how the Lorax was lifted and taken away. The Lorax is a creature which pekas for the trees and tries to stop them from being chopped down; “I am the Lorax. I speak for the trees. I speak for the trees, for the trees have no tongues. And I’m asking you sir, at the top of my lungs – that thing! That horrible thing that I see! What’s that thing you’ve made out of my truffula tree?”

The story has an environmental undercurrent which caused a bit of controversy at the time as it was claimed that the book was unfair to the logging industry.


Error: API requests are being delayed. New posts will not be retrieved.

Error: API requests are being delayed for this account. New posts will not be retrieved.